Japanese knotweed, sometimes known as Bamboo & Peashooters is one of the most invasive plants in the UK and can spread quickly from a tiny crown or rhizome. It is a perennial weed that will grow and spread quickly if not controlled, suppressing the plants growing around it. Read our full blog to find out about the Japanese Knotweed Hotspots in Wales.

The shoots die off above the ground in winter and then re-emerge above ground again at the end of spring, early summer. Any established shoots can grow more than 9ft high and can colonise the soil within a few years.

There are some articles that say you can eliminate the roots of Japanese Knotweed with chemicals, however, you do need an NPTC qualified person to work with any chemicals and this is as a result of new legislation which covers the management and removal of Japanese Knotweed. It is an extremely hard and intricate process to control and remove knotweed and in most cases, it isn’t successful unless you use a Knotweed expert. In the peak of its growing season, 60% of the Knotweed is roots underground, making removal incredibly difficult, as well as risky due to one tiny fragment of crown or rhizome which can make it spread quickly underground. Removing Knotweed yourself and without expert knowledge can result in a very high chance of it spreading to other areas of soil which were previously unaffected.

Because Japanese Knotweed spreads easily and quickly there are lots of hotspots around the UK. In this article, we are focusing on Knotweed Hotspots in Wales as well as some News stories.

02 July 2019: The top ten Japanese knotweed hotspots in Wales have been revealed today by Environet UK. Carpel Garmon in Conwy is the worst affected locationwith395 infestations within a 4km radius, followed by Llanelli in Carmarthenshire, Caerphilly and Swansea.

Described by the Environment Agency as “indisputably the UK’s most aggressive, destructive and invasive plant”, Japanese knotweed grows rampantly along railways, waterways, in parks and gardens and is notoriously difficult to treat without professional help.

Environet has mined data from its online heatmap Exposed: The Japanese Knotweed Heatmap, launched earlier this year, which records Japanese knotweed sightings across the UK. The map is intended to inform local homeowners and potential homebuyers of the local presence of Japanese knotweed, enabling them to enter a postcode to discover the number of reported knotweed sightings nearby, with hotspots clearly visible in yellow or red.

Japanese knotweed can deter buyers, making a property difficult to sell and prevent a mortgage lender approving a loan unless a treatment plan is in place with an insurance-backed guarantee, thereby impacting a property’s value by around 10%. Sellers are required by law to inform potential purchasers whether their home is, or has been, affected by Japanese knotweed, which can act as a deterrent even if the infestation has been treated.

Environet estimates that Japanese knotweed currently affects 4 to 5% of UK properties, wiping a total of £20 billion off house prices.

Nic Seal, Founder and MD of Environet, said, “Japanese knotweed has become a major problem across Wales, with notable hotspots around southern coastal towns from Llanelli down to Swansea and Bridgend. It is impacting property prices, halting sales and causing a huge amount of stress and worry for homeowners.

“At times such as this when the property market is slow and fewer homes are being bought and sold, it continues to spread unchecked. Anyone thinking about buying a property in Wales, particularly in these hotspots, would be wise to check the number of infestations in the proximity of their postcode and consider instructing a Japanese knotweed survey on the property.”

Homeowners who are concerned about knotweed infestations near their home could consider purchasing a specialist Japanese knotweed indemnity policy, which covers them for the cost of treatment, repairs, legal costs and any diminution of the property’s value, should knotweed arise.

How close is Japanese knotweed getting to my home? Discussed by BBC News on 11th August 2017

Back in the nineteenth century, when Victorian engineers were designing the latest in transport technology, Japanese knotweed sounded like a very clever idea.

A plant that typically colonised volcanoes in Japan was imported to Britain to help hide, or possibly even stabilise, railway embankments.

Since then its spread has caused much unhappiness amongst home-owners and prospective house purchasers.

It can crack tarmac, block drains, undermine foundations and invade homes. Its presence can be enough to cut a property’s value by up to 20%, or prevent a mortgage lender approving a loan.

How close is it to me?

More than 20,000 people have now downloaded it, and their data has pinpointed over 6,000 knotweed locations.

“If we can get more people taking an interest and submitting records, so much the better,” says Dave Kilbey, director of Natural Apptitude, which designed and launched the app.

“Hopefully it will mean people will become a bit more aware of the problems, and what to look for.”

So far the results show a particular concentration of knotweed in South Wales, the Midlands, London, Scotland’s central belt and Cornwall – where the plant was also introduced by Victorians into ornamental gardens.

Those looking for a property can use an app to find out if knotweed has been found nearby – but the fact it is not on the map does not mean it is not present; it is simply that no one has reported it. 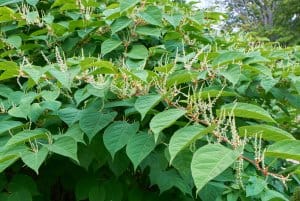 How to Recognise Japanese Knotweed

The data provided by the PlantTracker app is also added to the National Biodiversity Network (NBN) atlas, which aims to track the whereabouts of all the UK’s plants and animals, from bee orchids to goshawks.

Even though it has only been available to the public since April, and is not yet fully functional, the atlas has further information about Japanese knotweed locations.

But Purba Choudhury, communications officer for the NBN, says that if there are no records in your area, that doesn’t guarantee its absence.

The South Wales section of the NBN map shows how knotweed spreads along the course of rivers and canals.

In such locations, tiny fragments of knotweed float downstream, and quickly establish themselves elsewhere.

What if I find Knotweed?

Trying to destroy Japanese knotweed by yourself is virtually impossible.

That is because the roots, or rhizomes, spread rapidly underground, and can regenerate from tiny amounts of material. In fact, it can grow at the rate of 10cm a day during the summer.

“Digging it out of the ground can just spread it terribly,” warns Stephen Hodgson, the chief executive of the Property Care Association (PCA).

“If you’ve got it in your garden, either leave it alone or treat it properly.”

The advice is as follows:

In an experiment being conducted in South Wales, thousands of plant lice were released last summer, in the hopes that they would help destroy some of the knotweed along river banks.

But otherwise, the accepted best-practice treatment is for professionals to inject the plant with industrial-strength weed killer glyphosate.

David Layland, the joint managing director of Japanese Knotweed Control, based in Stockport, says it is the only thing that works.

“Once we inject into it, it transfers into the root system pretty quickly, and then it binds with the roots. Over time, it rots away into the subsoil.”

But professional treatment is costly, starting at about £2,500, and going upwards to £30,000 for a major infestation.

Just as big a worry for many home-owners is the discovery that your neighbour has Japanese knotweed on his or her property, and refuses to do anything about it.

But under the 2014 Anti-Social Behaviour, Crime and Policing Act, local councils or police forces can now issue a Community Protection Notice (CPN), forcing neighbours to take action, and fining them if they don’t.

“I think when they are enforced – and they are starting to be enforced – CPNs are very effective,” says Stephen Hodgson.

“But they are, and should be, a measure of last resort.”

In the meantime, judges at the Court of Appeal are gearing up to provide an important precedent on who should pay if a landowner allows knotweed to encroach on somebody else’s property.

Next year they will rule on the case of Williams v Network Rail – after two homeowners in South Wales were awarded £15,000 to compensate them for knotweed which had spread into their gardens.

A grandmother’s garden has been taken over by ‘6ft tall’ Japanese knotweed.

Geraldine Jones, from Tanycoed Road, Clydach, claims her grandchildren can’t play in the garden of her council house and that she sometimes has to cut parts of it back just to be able to hang her clothes out to dry.

Swansea Council has said it is tackling the issue, but in the meantime, the 60-year-old, who has lived in the property for 20 years, said the weed had ‘grown out of proportion’.

“It is putting me under a tremendous amount of stress,” Miss Jones said.

“It’s terrible – it’s all overgrown and it’s come through the fence. It’s taken root in the garden.

“It’s grown out of proportion. My garden is like a jungle.”

The fast-growing weed has become such an issue in Miss Jones’ garden as she claims it reaches 6ft tall in some spots.

She added: “Why should I have to get up every morning and have to look at it?

“My grandkids can’t play in the garden and I’ve had to cut down some of the knotweed just to get to my washing line. I can’t even see my shed door as it’s 6ft tall in some places.

“It grows so rapidly, it’s stressing me out.

“I can’t cut it myself and it’s starting to come through the foundations now.”

Responding to this, a Swansea Council spokesman said: “Japanese knotweed is notoriously difficult to eradicate.

“We treat knotweed with herbicides to attack it at its roots because it is the best way to manage the problem.

“This involves two treatments with herbicides.

“We have visited the property to treat the knotweed with herbicide once.

“We will be visiting it again shortly to carry out a further round of treatment. The dead stems will then be dealt with during the winter (non-growing) months.

“Experience and evidence show this is the most effective approach to dealing with the problem.

“Cutting it back before the treatment process has been completed has no effect on roots and may lead to further spreading.”

We cover the whole of South Wales, West Wales up to North Ceredigion & Powys and throughout South Glamorgan & Gwent. In addition, we carry out contracts in the West Country, as far North as Shropshire and into the Midlands & Birmingham areas.

We are a fully qualified Japanese Knotweed Certificated Surveyor (JKCS), family run business. We specialise in managing Japanese Knotweed, other invasive plant species and ‘general nuisance weeds’ that are found in the United Kingdom for residential premises and property development sites.

We also offer tree services, such as pollarding, crowning, pruning, felling, through our NPTC chainsaw operators, all of whom possess a vast amount of practical experience in the forestry industry.

Our Qualifications & Accreditations include:

We hope our article on Knotweed Hotspots in Wales has helped you. If you are concerned you may have Japanese Knotweed at your property in Wales then contact us on 01269 591651 and one of our team will be able to answer any questions you may have and arrange to come out to your property. Don’t be concerned and scared by anything you have read as we are experts in the Control and Removal of Japanese Knotweed and it won’t cost you as much as you might think.