The Dangers Of Giant Hogweed

You will quite often hear about the dangers of Giant Hogweed and how it has injured an adult, child or animal which is why you should be aware of it, what it looks like and the dangers of it when out walking.

When out walking in the UK the risks of brushing against giant hogweed is relatively low but the best way of avoiding being injured by it is by knowing what it looks like and looking out for it.

Giant hogweed real name is Heracleum mantegazzianum and it is also known as cartwheel-flower, giant cow parsley, giant cow parsnip or hogsbane. It is a monocarpic perennial herbaceous plant in the carrot family Apiaceae and it is native to the Caucasus region of Eurasia and Southwestern Asia. Its main habitats are streams, riversides, roadsides, woodland and parks. It has become extremely widespread and a public health hazard in North America, Europe and now more commonly in the UK.

It was previously known as the Umbelliferae and its plant family includes parsley, carrot, parsnip, cumin and coriander, it is also sometimes referred to as wild rhubarb due to its leaves matching the appearance of rhubard.

Giant Hogweed was brought to Britain as an ornamental plant in the 19th century and has now spread throughout our countryside. When it is fully grown it can reach heights of anything between 1.5m to 5.5m and 1 and 2m wide. In its first year, the weed has rosettes of jagged type leaves and in its second year of growth, tiny white flowers will form. This is when it is most likely to spread and fertilise other soil as the seeds from the flowers get blown around.

Why is Giant Hogweed so Dangerous?

The giant hogweeds sap is phototoxic and causes phytophotodermatitis in humans and animals, which in simple terms means the skin will become red, agitated, blister and sometimes scar, often being affected when it comes into contact with sunlight for years to come.

The skins serious reactions come from the furanocoumarin derivatives in the leaves, roots, stems, flowers, and seeds of the giant hogweed and the skin can react to the weed by just brushing against it.

Giant hogweed looks extremely similar to a large infestation of the cow parsley plant. It has ridged, green hollow stems which are purple-spotted with stiff white hairs at the base of each leaf stem. The weed has large and divided jagged leaves in a rosette shape in the first year of growth, followed by white or slightly pink, umbrella-like clusters of flowers from June to July time from the second year. onwards

The flowers form in clusters of umbrella-like heads which are known as umbels and face upwards, the clusters alone can reach a diameter of 60cm. Its seeds are around 1cm long, flat and oval-shaped with brown lines which reach 3/4 of the seed length.

What happens if you touch Giant Hogweed?

The skin reaction caused by giant hogweed can and almost always causes painful blisters and extremely red and sore skin, normally within 48 hours. The reaction happens after the skin has come into contact with the weed and its sap. Giant hogweed can cause long-term sun sensitivity, scars from the blisters as well as temporary or permanent blindness if any sap gets into the eyes so you should never go near it or touch it. 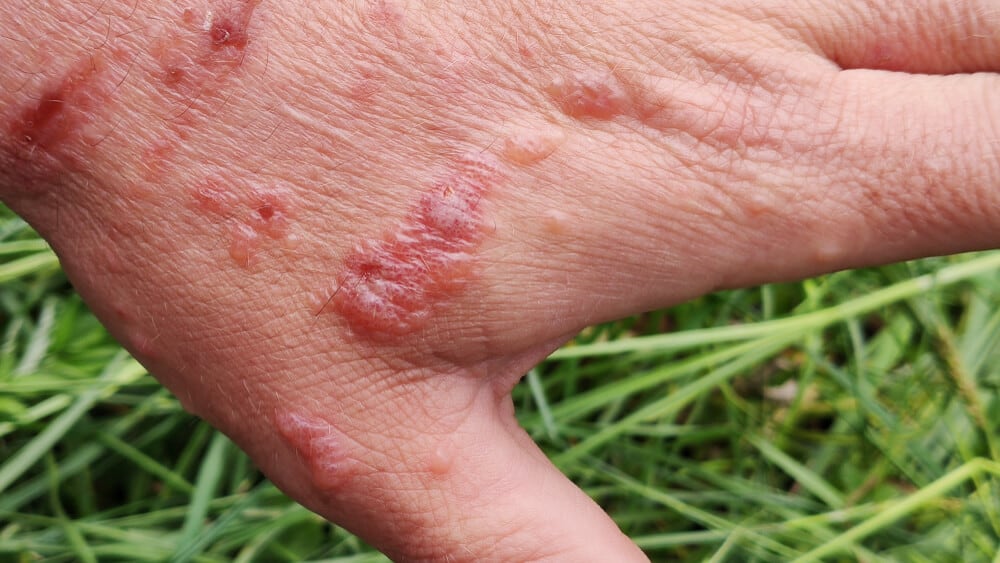 What is a Hogweed rash?

Giant Hogweed blisters can quickly develop into a skin rash called Phytophotodermatitis, also known as Lime Disease but not the same as the tick illness Lyme disease. It causes symptoms including red skin inflammation, itching, and blistering. The contact with hogweed creates a chemical reaction making the skin hypersensitive to ultraviolet light (sunlight) and the same reaction can re-occur for 6 years plus.

How can you identify Giant Hogweed?

If you suspect a growth of giant hogweed we would advise that you contact a nuisance weed specialist like South Wales Knotweed Removal & garden Services straight away. We have many years of experience in the nuisance weed industry and we can quickly and safely identify it, advising you of the best solution.

Giant higweed can actually smell strongly of parsnip but never go near enough to smell it as you could risk touching it and your skin having a bad and unpleasant reaction to it.

Where does it tend to be found?

It’s most commonly found along riverbanks where its seeds are transported in the water to new locations, allowing it to quickly colonise and spread but it is being found more and more in the UK in other locations, including parkland and the general countryside.

What should you do if you touch it?

If you accidentally touch or brush against it then you should keep the area covered from sunlight, wash it thoroughly as soon as you can and seek medical attention very quickly. You should also be very vigilant when walking your dog or if you have livestock as it can affect their skin too.

The dangerous sap causes painful blistering which can recur over months and years if your skin is exposed to the sunlight after touching it.

How can you tell the difference between Hogweed and Giant Hogweed?

If you are at all unsure then contact South Wales Knotweed Services who are nuisance weed experts. We will be able to quickly identity if it is hogweed or giant hogweed and advise you of the best and safest removal and management method.

How should Giant Hogweed be treated?

Giant Hogweed is extremely difficult to control and treat safely with longevity. Herbicide treatment is required in the early growing season from April to May and then again the 3 to 4 years following as its seeds can stay alive in the soil for this amount of time. One seed can result in it growing and spreading again so you should always use a nuisance weed specialist who has experience in herbicide treatments and has the qualifications to use them.

A giant hogweed plant can disperse around 50,000 seeds and a herbicide treatment will only treat any germinated plants and not the seeds which are present within the soil. This means that treatment is required year after year to remove it completely and should always be carried out by a nuisance weed specialist.

What should you do if you think you have seen Giant Hogweed?

There are no regulations in the UK which state you need to notify anyone that Giant Hogweed is growing on your land. However, reporting the growth to the environment agency will support the spread of the dangerous weed which poses a risk to people and animals. If you see it or think there might be growth on a public footpath then you should inform your local authority who may treat it.

The most commonly found invasive, non-native plants include:

You do not have to remove these plants or control them on your land. If you allow Japanese knotweed to grow on anyone else’s property you could be prosecuted or given a community protection notice for causing a nuisance.

This information is sourced from gov.uk and you can find out everything you need to know here:

We are experts in the control and treatment of nuisance weeds and work for the local council and privately to support the management and removal of them.

We also provide tree services, such as pollarding, crowning, pruning, felling, through our NPTC chainsaw operators, all of whom possess a vast amount of experience in the forestry industry.